Regional launches also took place in Christchurch on Monday 6 May and Wellington on Tuesday 7 May.

Swannanoa School in Rangiora near Christchurch created their own banners reminding drivers to slow down outside their school, and measured out stopping distances.

Epuni School in Lower Hutt, Wellington, held a Fancy Feet parade. The students dressed their feet up with bright or neon socks, shoes, ribbons and sparkly things. They walked to school and held a parade around the local streets to show off their feet and promote safe walking in their community.

Collingwood Area School students designed their own Road Safety Week posters and created videos and radio interviews with students about the importance of wearing a helmet when out on bikes and scooters.

Epsom Normal School held a Bright mufti Day on Friday 10 May in aid of Brake, and made their own posters about being safe on roads to be displayed at school.

Sand Dunes Early Learning Centre in Plimmerton held a wheels day on Thursday 9 May. They also created road safety signs and banners telling drivers to slow down outside their centre and had a talk from their community police officer.

Raumati Beach School ran a range of road safety activities on a daily basis throughout the week including using the Brake PowerPoint slides and celebrating their pedestrian crossings which have recently been put in place.

Learning Links Childcare walked to the shops during the week and talked about being safe when you're out walking. They also made road signs.

Three Kings School had ten students holding up "go slow" banners on the footpath before school. The whole school took part in a walk or wheel competition throughout the week with prizes for the classes that used sustainable methods to get to and from school. Thursday was a bright mufti day highlighting the vulnerability of pedestrians and the need to be seen when you're walking.

Krafty Kidz have been talking with the children about road safety, car safety and car seats. The children went for a walk and looked at road signs, made road signs and put them out in the playground.

The junior classes at Hope School were visited by the local constable for three afternoons, teaching them about keeping safe on town and country roads. They practised stepping up to kerbs and back, sneaky driveways and using pedestrian crossings. At the end of the week the school had a "Be safe, be seen" day, dressing up in bright clothes.

Riverlands School made large posters which the children held up on the side of the road before and after school.

Swanson School ran various activities throughout the week. The older students made a radio ad and younger students created posters, sang songs and completed road safety worksheets. A special assembly was held on Friday to show off everything. They have also launched their walking school buses and reminded parents about the importance of seatbelts.

Windley School held a special road safety assembly with the Mayor as a guest, and handed out badges to hard-working patrol wardens.

QBE Insurance held Bright Days at their offices across New Zealand to raise money for Brake and raise awareness of the vulnerability of people on foot and bicycle.

Coastline Roadmarking conducted a refresher course for all its staff on general traffic safety and how they can eliminate the risk their activity poses to pedestrians and motorised traffic alike. The company's research focused on the pedestrian and how current systems could be improved to aid pedestrian safety.

TSI Logistics displayed posters around their site, and included them with all outbound paperwork, drivers were encouraged to take the Brake Pledge. The Pledge PowerPoint was used with drivers to generate discussions.

MWH visited the students at Copeland Christian School to work with the students on road safety and encourage the children to walk and cycle to school. They also sent out road safety messages via Facebook.

Taupo District Council held its youth road safety expo on Thursday 9 and Friday 10 May. Young people and their parents will be hearing from families bereaved and injured in crashes as well as emergency services.

Auckland Transport took the "Its all about choices" demonstration, which uses a crashed car to illustrate the consequences of a bad decision, to Orewa/Whangaparaoa during the week to work with young people. They also took part in the youth expo in Orewa on Saturday 11 May, organised by Blue Light as part of Road Safety Week and Youth Week.

Hawke's Bay Regional Council held its Youth Alcohol Expo 13-17 May focusing on the risks of driving impaired by either alcohol or drugs.

The Adolescent Mobility Health Consortium held its second symposium "Moving forward: decreasing car use among teenagers" at the University of Otago on Wednesday 15 May.

Road Safety Week materials were displayed at the Kids Trauma Conference on Friday 3 May.

Elevate Fitness held a Bright Night at their Fight Fit class in Auckland. The class dressed in their best neon 80s-style keep fit gear and worked out to 80s music as well as raising awareness of the vulnerability of people on foot and bike. 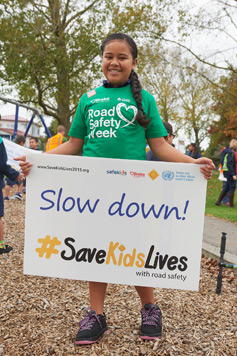 Please help us to support bereaved and injured people, and campaign for safer roads.